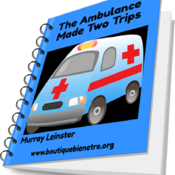 The Ambulance Made Two Trips

If you should set a thief to catch a thief, what does it take to stop a racketeer...?_

Detective Sergeant Fitzgerald found a package before his door that morning, along with the milk. He took it inside and opened it. It was a remarkably fine meerschaum pipe, such as the sergeant had longed irrationally to own for many years. There was no message with it, nor any card. He swore bitterly.

On his way to Headquarters he stopped in at the orphanage where he usually left such gifts. On other occasions he had left Scotch, a fly-rod, sets of very expensive dry-flies, and dozens of pairs of silk socks. The female head of the orphanage accepted the gift with gratitude.

"I don't suppose," said Fitzgerald morbidly, "that any of your kids will smoke this pipe, but I want to be rid of it and for somebody to know." He paused. "Are you gettin' many other gifts on this order, from other cops? Like you used to?"