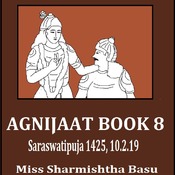 Agnijaat Book 8 contains shlokas (translated by Swami Ramsukhdas, their English translations done by me) from Shrimadbhagwat Gita. These shlokas or hymns are from Gita, the words of Gita were the sermons Lord Krishna gave his friend Arjuna before the war of Mahabharata. When Kaurava and Pandava- two sets of cousins were about to fight each other to death!

Arjuna was one of the five Pandava brothers who after much harassment in the hands of wicked Kauravas led by Duryodhana their cousin decided to fight them and retrieve what was rightfully theirs from their unrighteous occupation.

When the two armies gathered in the Kurukshetra battleground Arjuna was aghast, he refused to kill his own cousins and decided that he will give up his rightful kingdom and become a hermit. Krishna counseled him to fight the war that had to be fought to destroy corruption from world. Because nothing about Kaurava was just or righteous! Anyone who has read Mahabharata can vouch on that.

These shlokas are not a counsel for war-craft, they are an amazing collection of how human beings should live! They are awesome believe me!