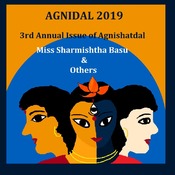 Agnidal Annual Issues will contain one or more works and an interview of its family members. "Agnishatdal Parivar". You will read few stories, poems and enjoy some amazing artworks in these pages. Hope you will love them.

Unlike Sfulingo, the contents of Agnidal illustrated is same as the book in Kindle, and if you read both books you will know why I have created my shop in shoptly. Creating is so much more fun here! In case you don’t Shoptly books are illustrated in colour and Kindle books are without any illustration.

The party was well underway when the band stopped playing, as the aliens arrived by teleport nimbus, new to this world. One of them silently exploded, then vanished without warning. Weapons ready, but disoriented by the sudden disappearance of their comrade, several dozen sets of alien eyes quickly scanned the room for unexpected hostiles, seeing only surprised, wary, and unarmed humans.

A man strode forth from the crowd, different in some odd way to the humans surrounding him. Perhaps it was the way he carried himself, or the mirrored polarized lenses concealing his eyes at this hour of night. The aliens had never before seen his like.

His arms folded at his chest, confident, perhaps even arrogant, his resonating voice easily covering the distance across the room from he to they as he spoke.

"I am the Mirus, Slayer of Planets, and I trust I have your full attention, sapients?" he purred with a grin, surgically implanted, sharpened canine teeth showing between slightly parted lips. This was clearly not a gesture of goodwill. He had removed the lenses covering his eyes, revealing a dull violet glow from them as he translated between his mammalian speech and their own.

"I do then? That’s good. I hate it when people are too stupid to listen, but you seem like a smart bunch. So, I’ll warn you but once: I’ve just turned one of you into a spray of subatomic particles and scattered him across the galaxy. I’m wondering who among you wishes to join your fellow?" he continued, "This planet is under my protection—and you’ve only two viable options: you may leave now and forever vacate this system without a fuss, or you can simply be destroyed as I set off every neutrino sensor on this planet with your demise and that of your fleet."

The aliens looked first at him, then exchanged glances among themselves, and from them a sometimes sighing, sometimes slurping, sometimes chittering sound, interspersed with flutelike notes was exchanged between them. They were evidently nervous at the audacity and dead seriousness of this human, or perhaps more likely a being very much like one.

It soon subsided, and the aliens turned their sensory tendrils directly toward the him, emitting a flurry of sound. He smiled once again, this time without showing teeth.

"A smart decision on your part. Don’t ever come here again, as I’ve a short temper and less patience than I really should."

The teleport nimbus shone again as the beings vanished, returning to their orbital craft, soon to quickly vacate the planet’s gravity well and reenter the Maelstrom on their interstellar journey out of system.

"Well, that went much better than expected. I’m really, really glad I managed to pull that one off. That species is full of hard cases and difficult to fool." The Mirus breathed a sigh of relief, his demeanor much more casual, though looking almost shaken at the riskiness of his gambit as he put his mirror-shades back on, taking a sip of his drink.

"And I know just the band request to finish the night…"

The creative group of Agnidal (and Agnishatdal) (No order please, just the names as they appeared in mind) :