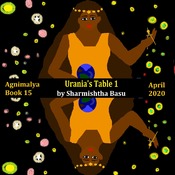 Selected set of human beings are scouting the universe for other homes for human race.

No, don’t be sad already, earth is very fine, especially since a large group of people relocated to Mars and moon first, and then after the miracle that happened in 2222 CE they are scattered all over the universe, looking for planets that can provide shelter for human beings, there is only one rule, that won’t/can’t be disobeyed- it has to be free from any life form with thinking capacity, if it has thinking sponges, even then as per the universal ethic created by High command in earth human beings are to leave that planet alone!

They can try their lucks in planets which have life-forms like plants but not the ones with thinking lizards or ants to be precise! Not only that, they will have to adjust with not eradicate the life-forms of that planet, even if they are poison ivy-like! How? High Command does not care! If you can’t leave that planet alone is the command of high command! Disobeying or cheating? Ha! Dream of it!

“The miracle” also ensured that High command keeps a watch on everywhere human beings land and their effects on that planet’s ecosystem!

I know you are dying to know about the “miracle” - well, it was a visit!

Man was already living in Mars and moon, small dome like structures has popped up all over the surface of mars and moon, inside them earth-like environment was created and maintained. Outside it was Mars and moon, not very hospitable.

Earth has changed a bit, after the polar caps melted, population has seriously decreased some sense seeped into the brain of the remainder, and they stopped squabbling, instead of that they joined hand and started building a world that lived on ships.

They showed up, not from outside, but from within our ocean. A group of representatives with a gift for mankind!