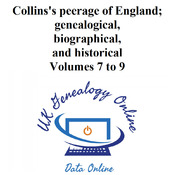 Collins's peerage of England; genealogical, biographical, and historical Volumes 7 to 9

This collection is for sale on EBay at £270