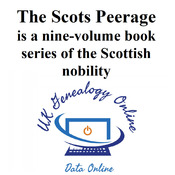 The Scots Peerage is a nine-volume book series of the Scottish nobility compiled and edited by Sir James Balfour Paul, published in Edinburgh from 1904 to 1914. The full title is The Scots Peerage: Founded on Wood's Edition of Sir Robert Douglas's Peerage of Scotland, containing an Historical and Genealogical Account of the Nobility of that Kingdom.

The book series, which begins with the Kings of Scotland, is a comprehensive history of the Scottish peerage, including both extant and extinct titles. It also includes illustrations and blazons of each family's heraldic achievement: arms, crest, supporters and family mottos. Each entry is written by someone "specially acquainted with his subject, a feature of which the editor is justly proud," The Spectator noted on release of the third volume in 1906.

The full title refers to the earlier work by Sir Robert Douglas, who in 1764 published a one-volume book, The Peerage of Scotland. He was working on a second volume, but died in 1770 before it was completed. Editors finished the volume, and it was published in 1798 as Baronage of Scotland, Containing an Historical and Genealogical Account of the Gentry of that Kingdom.
A revised edition was published in 1813, edited by John Philip Wood, and received some criticism for errors committed by both Douglas and Wood.
Sir James Balfour Paul, who served as the Lord Lyon King of Arms from 1890 through 1926, wrote of the need for a new authoritative work on the subject to be published. The book is dedicated to Sir William Fraser, who left in his will funds for "printing works which would tend to elucidate the history and antiquities of Scotland"