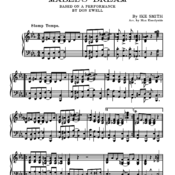 Mabel's Dream, composed by Ike Smith, was originally recorded in 1923 by King Oliver's Creole Jazz Band.  In 1952, Don Ewell recorded a fantastic piano solo of the piece in the style of Jelly Roll Morton (Winding Ball Record 101, 1952); it is that version on which this sheet music is loosely based.

Instead of a note-for-note transcription, this is my personal arrangement as inspired by Ewell's genial performance.