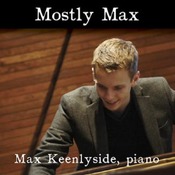 "When it was released in 2010, Max Keenlyside's first CD for Rivermont, KeenlyStride, garnered rave reviews from critics in the United States and abroad. The disc's focus was on the music of stride and jazz pianists of the 1920s, and while the playlist contained many "standards" of the genre, Keenlyside's fresh and thoroughly musical performances were widely praised. "Execution is one thing and execution with feeling is another," wrote reviewer Jack Rummel, "and Max has got a lot of Harlem in his soul."

For as long as he has been playing ragtime, stride, and jazz, Max Keenlyside has been active as a composer as well, frequently featuring his own works in his concert and festival performances. He has published several folios of original ragtime compositions, and in a testament to their superb quality, his works are now regularly performed by others in the ragtime community, several already hailed as modern classics. If KeenlyStride held any disappointment, it's that the CD didn't make room for Keenlyside's own works.

That has been fully rectified with his second Rivermont CD, Mostly Max, a collection that features eleven of Keenlyside's own celebrated compositions, along with a suite of works by Willie "The Lion" Smith and a waltz by James Scott -- all played to perfection on a gorgeous Steinway Model D. Rivermont is extremely proud to offer this important document of ragtime piano in the 21st century: a tradition that is obviously alive and well. More than a "document," though, this disc includes some mighty fine music!

This CD includes a 12-page illustrated booklet with detailed notes by the artist. 54 minutes."